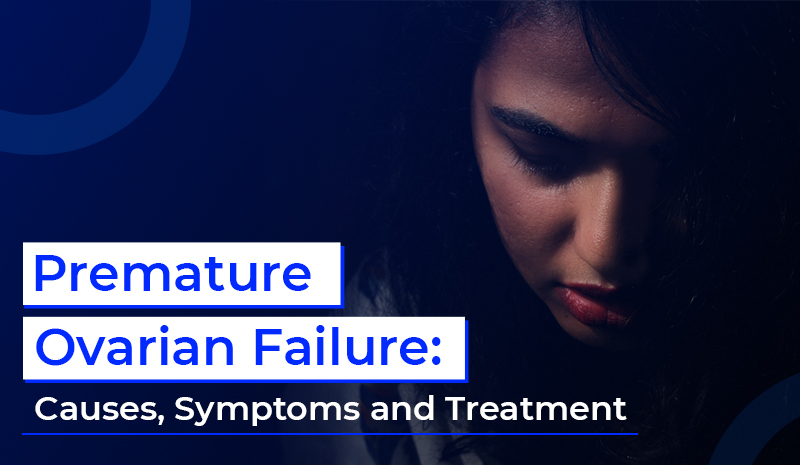 Premature ovarian failure which is now known as premature ovarian insufficiency is a condition in which a woman’s ovaries produces fewer eggs than they are generally supposed to produce.

Does it affect pregnancy?

Ovaries have two million follicles at the time of birth and decrease gradually to lakhs at the time of menarche. Every month when one of these follicles matures and goes unfertilized, it bursts; hence your monthly cycle. It’s a natural process that starts at a very young age and after 45, the follicles decreases to 300 or 400 in number and heads gradually toward menopause, stopping of the menstrual cycle entirely.

Premature ovarian insufficiency meddles with the production of these follicles. As a result, it causes a significant decline in the egg generation.

Displaying early menopause like traits, premature ovarian insufficiency still allows a woman to menstruate, but the cycle is sporadic; sometimes skipping even months before your next period. Doesn’t mean women can’t get pregnant. They still can, but the chances are very much lower than the women who have fully functioning ovaries.

One of the distinguishable symptoms is premature menopause.

The most common symptoms are infertility, vaginal dryness, sexual dysfunctioning, and insomnia.

Treatment for ovarian insufficiency depends on the severity of the disorder and usually focuses on the problems that arise from estrogen deficiency. Nevertheless, the disorder is treatable and can be treated with suitable medications.

The combination of hormones may make your period come back, but it won’t restore ovarian function. Depending on your health and preference, you might take hormone therapy until around age 45 to 55 — the average age of natural menopause.

In older women, long-term estrogen plus progestin therapy has been linked to an increased risk of heart and blood vessel (cardiovascular) disease and breast cancer. In young women with primary ovarian insufficiency, however, the benefits of hormone therapy outweigh the potential risks.

For women ages 19 through 50, experts generally recommend 1,000 milligrams (mg) of calcium a day through food or supplements, increasing to 1,200 mg a day for women age 51 and older.

The optimal daily dose of vitamin D isn’t yet clear. A good starting point for adults is 600 to 800 international units (IU) a day, through food or supplements. If your blood levels of vitamin D are low, your doctor might suggest higher doses.

If you are struggling with premature ovarian insufficiency and planning for Motherhood, considering IVF treatment will be a good idea. Talk to an expert to understand your options to start your family. You can book an appointment by calling our team at 8886592229 or visit http://aaradhyafertility.com/