Miscarriage Matters A Lot! Know How to cope up After Miscarriage 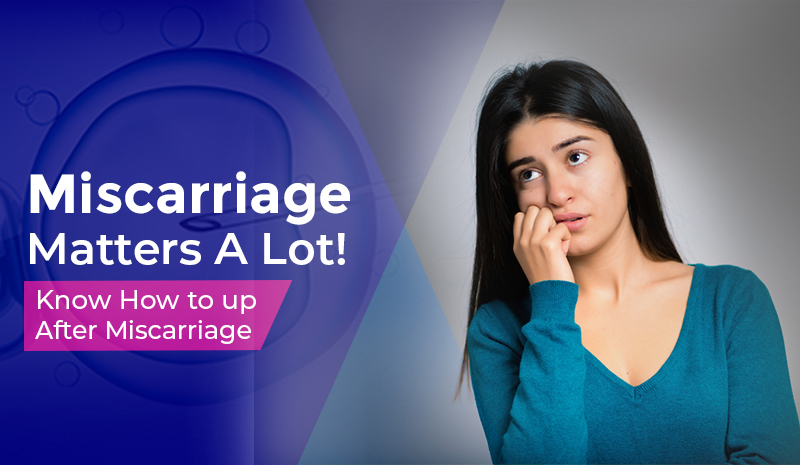 Miscarriage Matters A Lot! Know How to cope up After Miscarriage

Miscarriage or loss of pregnancy is a common occurrence around the globe. According to official data, about 10 to 20 per cent of known or unknown pregnancies end in miscarriage. Miscarriage is an emotional and often traumatic time. No matter how much you try to brush the feeling aside, it does not go away that easily. In addition to experiencing enormous grief over the loss of your baby, there are physical impacts of a miscarriage — and often relationship impacts, too.

If a miscarriage happens during the first 3 months of pregnancy (known as early miscarriage), it’s usually caused by chromosomal abnormalities in the fetus. These happen by chance. Chromosomes are blocks of DNA, which contain instructions for your fetus development. The other reasons can be due to genetic problems, infection, hormonal issues, uterine abnormalities, age or other underlying medical conditions.

Pregnancy loss or miscarriages can be one of the toughest losses a person or a couple suffers from. While miscarriages are unfortunately not uncommon but can start feeling like a nightmare for those suffering from it. 15% of couples who get clinically pregnant suffer from spontaneous loss of a pregnancy.

Another important thing for couples and especially for women to understand is that there are some misconceptions about the loss of pregnancy including:

While nothing can erase the loss, there are steps you can take in both the short- and long-term to help you move toward healing and recovery.

Technically speaking, a miscarriage is a pregnancy lost before 20 weeks. Unfortunately, 15 per cent of known or diagnosed pregnancies miscarry, most before 12 weeks gestation. Most miscarriages are caused by a genetic abnormality that keeps the fetus from developing normally. Everyday activities, such as exercising, working, and having sex, don’t cause miscarriages. Yet many women still blame themselves.

In the weeks after a miscarriage, many women experience a roller coaster of emotions. At the same time, a woman who has just miscarried is going through hormonal shifts as her body readjusts to not being pregnant. Her changing hormones may intensify the emotions she’s feeling.

Coping as a couple

Men and women typically respond to miscarriage differently. Often, men shift into problem-solving mode when faced with a crisis. They may end up feeling helpless and inadequate when they aren’t able to “fix” their partner’s grief. Miscommunication is also a common problem. Often, a man sees his partner cry when he talks about the baby, so he learns not to bring up the subject. And because he doesn’t bring it up, the woman might feel he doesn’t care, when he really does.

To help counter the effects of a miscarriage on couples’ relationships, experts advise men to show how much they care and to open up and share their feelings. For example, they can watch the other children, do the dishes, or take their partner out for a special dinner.

Miscarriages may leave the couple feeling utterly drained and bereft of hope. For the women, it becomes difficult to focus on the future and have faith in it. It affects her mental and emotional health as well as her physical health and social well-being.

At Aaradhya Fertility, we understand this and endeavour to ensure that we support the women and the couple in every way we can. There are treatment options for anatomic abnormalities of the uterus including surgical restoration. Not only do we provide surgical support to the couple but also IVF treatment and facilities. To schedule, an appointment with a specialist at Aaradhya Fertility Centre call us on 8886592229 or visit https://bit.ly/3nHO7Ou