Impact of Obesity on Male Fertility 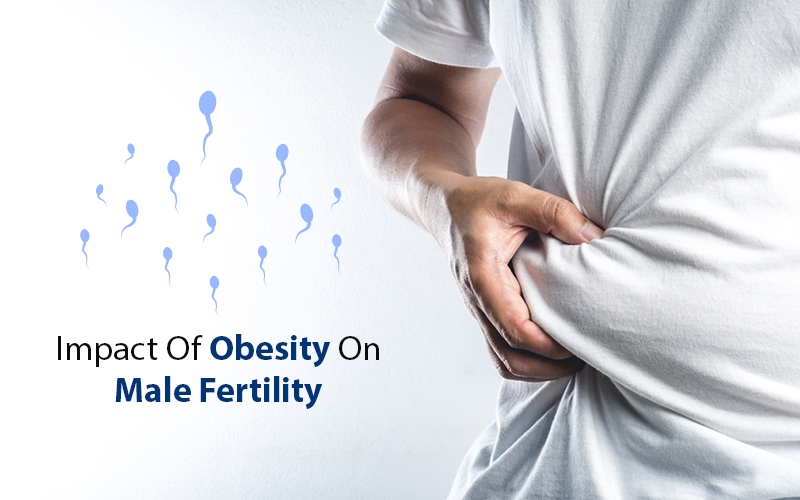 Impact of Obesity on Male Fertility

In the past 30 years, male obesity in reproductive-age men has nearly tripled which is adversely affecting male fertility. Severe health conditions, including type 2 diabetes, high blood pressure, high cholesterol, bone problems, obstructive sleep apnea, cancer and infertility have been linked to BMI. Being overweight or obese can cause hormonal changes that reduce fertility and make men less interested in sex. Obese men are more likely to have higher estrogen levels, combined with lower levels of sperm-producing hormones like inhibin b and androgen.

As per some studies, couples with an overweight or obese male partner, with a female of normal body mass index (BMI), have increased odds ratio for increased time to conceive compared with couples with normal weight male partners. Recent data has shown that male obesity also impairs offspring metabolic and reproductive health suggesting that paternal health cues are transmitted to the next generation with the mediator mostly likely occurring via the sperm

The increasing prevalence of obesity calls for greater clinical awareness of its effects on fertility, a better understanding of underlying mechanisms, and exploration into avenues of treatment. It is possible that in each overweight individual, different mechanisms are involved leading to one or more of the alterations in semen parameters and not in others. This article reviews the studies linking the pathology of obesity to male subfertility and discusses the proposed pathophysiological mechanisms underlying these intricate relationships.

The proposed mechanisms for infertility in obese men: male obesity and semen parameters

Several studies have investigated the impact of male obesity on the traditional sperm parameters mandated by the World Health Organization (WHO), namely sperm concentration, sperm motility and sperm morphology. The effects of obesity on male reproduction are less well documented than in the female. However, several studies indicate that sperm quality and fertility are reduced in overweight and obese men.

Decreased testosterone and increased estrogen have long been associated with subfertility and reduced sperm counts by disrupting the negative feedback loop of the hypothalamic-pituitary-gonadal (HPG) axis.

Sleep apnea (SA) is a type of sleep disorder which can negatively affect testosterone levels independent of BMI. SA has also been associated with reduced sexual quality of life.

Obesity can elevate body temperatures, especially around the scrotum. Elevated temperatures within the scrotum, due to fat tissue, could harm sperm cells. It is noteworthy that increased sperm DNA damage and oxidative stress are identified in obese patients.

An increase in leptin levels significantly decreases the production of testosterone from Leydig cells. Infertility in overweight/obese males may be explained by leptin insensitivity. Obesity was also shown to be associated with high homocysteine and low vitamin D levels.

While it is becoming clearer that male obesity has negative impacts on fertility, sperm function and, in the long-term, on the health of the offspring, it is equally clear that simple interventions, such as changes in diet and exercise, can reverse the disease state as well as offspring outcomes. If you are struggling to become a father due to over-weight reasons, please consult the best doctor and leading fertility clinic in Vizag, Aaradhya Fertility centre.