Azoospermia and How it Causes Male Infertility 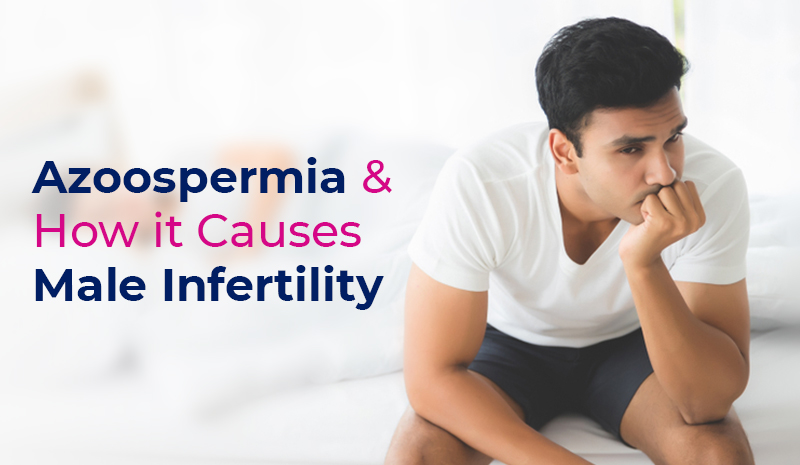 Azoospermia and How it Causes Male Infertility

Timely intercourse and getting all the elements aligned for ovulation day isn’t always enough to conceive a baby. Sometimes, your little swimmers may fall behind, not quite managing to reach the egg released by your partner. Else sometimes there may be a situation where the sperm count is actually zero and any number of attempts may not be fruitful. This condition is called as Azoospermia.

You can live a healthy life in spite of having a low sperm count. Although the conditions are not evident, patients with irregular chromosomes or hormone imbalances can complain about the following:

In a man who has Azoospermia, before initiating treatment, it is important to know the cause for lack of sperm in the ejaculate, whether it is from an obstructive or non-obstructive process. Azoospermia can thus be divided into two broad categories.

Obstructive Azoospermia – It means that sperm are being produced normally inside the testicle, but there is a blockage or obstruction in the reproductive tubing, that is not allowing the sperm to come out in the ejaculate.

Non-Obstructive Azoospermia – It means that sperm are being produced normally inside the testicle, but there is a blockage or obstruction in the reproductive tubing, that is not allowing the sperm to come out in the ejaculate.

Obstructive Azoospermia causes can be genetic, congenital or acquired.

Vasectomy – The most common cause of obstructive azoospermia is Vasectomy. Vasectomy interrupts the sperm ducts to stop the flow of the sperm. Hence no sperm are found in the semen.

Infection – Few infections can interfere with sperm production or sperm health or can cause scars that block the passage of sperm. These infections include inflammation of the epididymis (epididymitis) or testicles (orchitis) and some sexually transmitted infections, including Gonorrhea or HIV. Certain infections may result in permanent testicular damage, most often than not sperms can still be retrieved by a following a proper and accurate protocol.

Congenital Conditions – Some conditions are genetic. Some men are born with a missing portion of the vas deferens. Others may be born with a cyst in the prostate that blocks the ejaculatory ducts.

Surgical Complications – Few surgeries may prevent you from having sperm in your ejaculate, including vasectomy, inguinal hernia repairs, scrotal or testicular surgeries, prostate surgeries, and large abdominal surgeries performed for testicular and rectal cancers, among others can result in scarring that leads to a blockage. Mostly children are at risk because their reproductive tract is very small, and surgery can cause complication.

Non-Obstructive azoospermia can be caused due to the abnormalities within the testicles or hormonal causes. The causes can be genetic, congenital or acquired.

Genetic Cause – These include chromosomal abnormalities. The most common chromosomal problem causing azoospermia in men is a situation where there is an extra X chromosome, and the syndrome is called Klinefelter’s syndrome. Another genetic cause of azoospermia is a deletion of some of the genes on the Y chromosome. These genetic causes of azoospermia are not reversible, but still, most men with genetic issues can produce small amounts of sperm within the testicles that can be used to father a child.

Varicoceles – A varicocele is a swelling of the veins that drain the testicles. It is the most common reversible cause resulting in male infertility. Although the exact reason for that varicoceles causes infertility is unknown, it can be related to abnormal regulation of testicular temperature. Varicoceles deplete the quality of the sperm. Treating the varicocele can improve sperm quantity and quality, and drastically improves outcome when combined in ART techniques such as IVF/ICSI.
Hypospermatogenesis – This means that there is sperm production in testicles, but lower than the normal sperm count, which may not be enough to impregnate a female.

Ejaculation issues
Retrograde ejaculation is a condition when semen enters the bladder during orgasm instead of emerging out the tip of the penis. Many health conditions can be a factor to cause retrograde ejaculation, which includes diabetes, spinal injuries, medications, and surgery of the bladder, prostate or urethra. Few Males with spinal cord injuries or certain diseases cannot ejaculate semen, even though they produce sperm. In most of these cases, sperm can still be retrieved for use in ART techniques.

Maturation Arrest – Some men suffer from a problem in which the sperm produced in their testes do not mature. A few sperm may mature, but the majority of the sperm remain in the precursor stage. For pregnancy, mature sperm are required.

Testicular Cancer – At times, the first sign of testicular cancer is azoospermia or a very low sperm count. So, men with abnormal sperm count must be examined thoroughly.

Medical Treatment – Chemotherapy and radiation therapy used to treat cancer patients can cause temporary azoospermia. It is an acquired cause. Once treatment stops, the sperm production resumes may be within 2 years.

Supplements & Drugs – Another cause of Non-obstructive azoospermia is the use of testosterone and steroids, cancer medications (chemotherapy), certain antifungal medications, some ulcer drugs and certain other medications can harm sperm production and hence causes decreased male fertility. These can cause sterilisation and are very common. It is also an acquired cause and is reversible.

Aaradhya fertility Centre has an array of tools centred on treating Azoospermia. Couples who had lost all hope started growing their family by one little miracle at Aaradhya. Meet us today to get going on your journey to parenthood.  Call us 08886592229 or click on http://aaradhyafertility.com/